Donate
Home / About us / Our Blog / Tackling Malnutrition in Bajura: Project Completion
20 Dec 21

In November 2019, PHASE Worldwide and PHASE Nepal implemented a new project tackling malnutrition amongst mothers and children in Bajura, Nepal. Funded by the Waterloo Foundation, this project aimed to achieve this goal by improving nutritional practices during the first 1,000 days of life. The Waterloo Foundation also funded additional activities which ran alongside the original project, and were aimed at reducing the spread and impact of Covid-19 through improving awareness and providing essential support to the community.

Now, these projects have come to an end and we’re delighted to see some of the progress we’ve made over the past two years!

Bajura is one of the most remote, isolated and least-developed districts in Nepal. The region’s difficult geographical location, dry weather and minimal annual rainfall leads to low agricultural productivity and food insecurity. These problems are exacerbated by a general lack of resources, knowledge and skills, which reflects Bajura’s high rates of malnutrition and poor child and maternal health figures.

Although these past two years have been impacted by the COVID-19 pandemic and related uncertainties, such as repeated lockdown and transportation closures, PHASE Nepal staff continued to work tirelessly to deliver all project activities. The integrated Covid-19 response enabled the PHASE team to cary out essential prevention activities whilst improving awareness of the virus within the local community.

The project team intensively worked on a three-way approach in addressing the malnutrition problem in the supported villages, focusing on awareness raising, health activities and agricultural production. 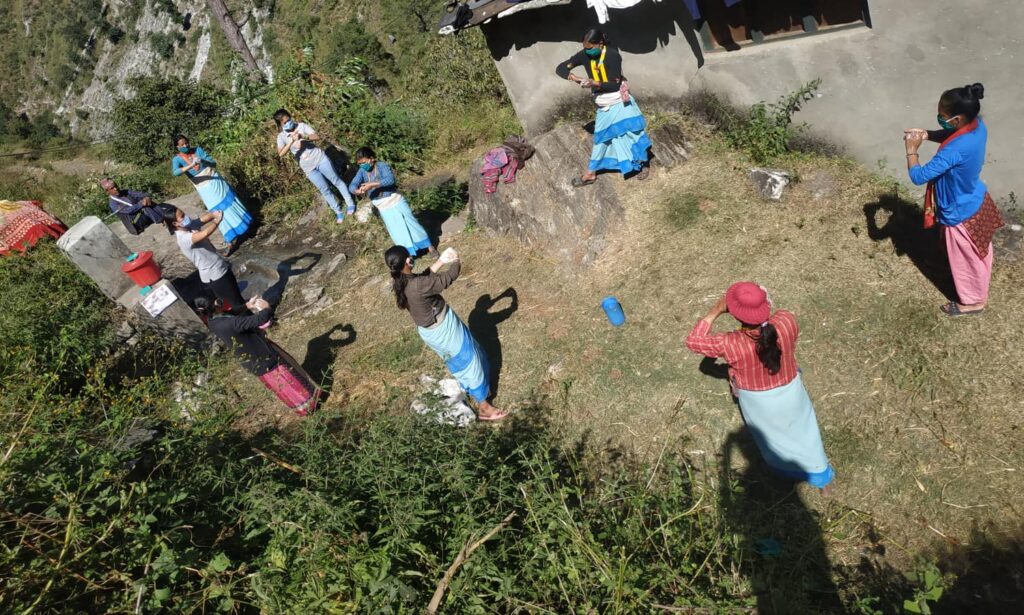 Furthermore, all pregnant mothers were identified and PHASE Health Staff regularly visited their homes and encouraged them to attend health posts for ANC check-ups. In addition, they were kept in small groups and were provided with detailed training about how to take care of themselves and their baby during pregnancy. These ANC trainings have had a huge impact and have enabled local women to learn and share their experiences with each other, when previously these subjects would not have been openly discussed. During the final year of the project, 55 women received ANC nutrition training.

Nutrition Workshops included everyone in the community and provided them with improved general awareness of nutrition. Community members were encouraged to adopt exclusive breast feeding, use super flour as a weaning food, properly consume green vegetables and revive the use of locally grown but discarded indigenous crops, such as millet, buckwheat, and maize. This highlighted their nutritious values and discouraged a dependency on rice. Over the past year, two such workshops were successfully completed with the participation of 99 community members.

Healthy Baby Workshops were also conducted, where children from six to fifty-nine months were assessed on their height, weight, and mid-upper arm circumference. Feedback and further support is then provided to the mothers whose children are malnourished. These activities have supported in the quick screening of severe cases of malnutrition and allow those suffering to seek medical help. This year, four Healthy Baby Workshops were held reaching 337 children.

The project also worked with 78 local Traditional Healers, collaborating with them as the agent of change as their views and recommendations are highly regarded within the community. In order to respect local culture and traditions, the healers were trained and coached to spread accurate messages of health and nutrition practices.

In total, 6,936 children under the age of five accessed support from PHASE Health Posts and 286 women attended ANC check-ups over the past 12 months. This year, 152 deliveries were conducted, 78 of which were institutional, rather than home births.

For the first time in the region, PHASE Nepal provided training to 259 of the most vulnerable women among pregnant and lactating mothers, improving their knowledge, skills, and start-up equipment to enable them to produce their own nutritious foods, whilst complementing their already available indigenous crops. The project mainly introduced mushroom farming, poultry rearing and year-round vegetable farming techniques suitable for mountainous, arid lands.

The project successfully enabled the 250 most vulnerable families to produce mushrooms for the first time ever in the area. Mushrooms were already regarded as a high value food in the communities, but people would previously have to fetch edible mushrooms from the forest. Having the ability to grow their own mushrooms is an incredible achievement for the community. Including mushrooms within daily meals has contributed to improving protein content in food and tackling child malnutrition. This year, 130 new farmers received the complete support, while 120 farmers from the previous year received spawns and follow up training, reaching 250 people.

Similarly, families were also supported with rearing dual-purpose poultry to ensure the year-round supply of eggs and meat to supplement the nutritional needs of children under five, pregnant and lactating women, as well as the family as a whole. During this reporting period, all 259 supported farmers were provided with 2,390 additional breeding chicks to expand their farms.

The project also trained and supported the beneficiary families in setting up and maintaining a home garden, where they can now grow a variety of up to 20 different vegetables for family level consumption. The farmers were provided with improved seeds, plastic greenhouses and other equipment and were provided with training on how to grow green vegetables in arid areas like Bajura.

These results show that this project has made a remarkable change in the area. For the first time, people grown mushrooms, reared improved breed chicks, and produced vegetables using a greenhouse. PHASE is planning to find further funding and continue the project activities to stabilise the change achieved so far.

This project has made a huge impact, despite the challenges caused by the COVID-19 pandemic, and we are optimistic that we can achieve even more in the future.

Help us continue our work

Your donation will help change lives

If you would like to support the work of PHASE Worldwide and help us to continue empowering people living in isolated regions of Nepal the best way to do so is through regular giving. Even the smallest amount a month can make a huge difference. As a regular supporter you will receive exclusive updates and will become part of the PHASE family. You can set up your regular gift easily and securely online.

It has now been six months since the Start Strong Project, match funded by the UK Government, launched and we wanted to share an update on its progress to date! The Start Strong Project aims to improve maternal health and reduce malnutrition for 1,000 vulnerable women and their children in…

The Start Strong project, match funded by the UK Government, launched three months ago and we’re delighted to share with you an update on the activities delivered so far. The aim of the project is to improve maternal healthcare and reduce malnutrition amongst 1,000 vulnerable women and their children in…